Two months ago we looked at commercial leasing activity including current vacancy rates and average rental rates for three primary product types – office, retail and industrial. This month, we examine sales activity for the same property types.  I have expanded this analysis back to 2007, the last year of economic growth prior to the “Great Recession”, to observe trends since that time.   As a benchmark, I have compared our local Grass Valley/Nevada City market with the closest large metropolitan area – Sacramento.

In our local market, the number of commercial property sales peaked in 2007.  Our database indicates a total of 22 sales (not including multi-family product) closing in 2007, with a corresponding dollar value of approximately $16 million.  Sale transactions and volume then dropped to their lowest levels in 2009 with only 9 commercial sales totaling roughly $4.8 million.  Since 2009, market activity, as represented by number of sales, has been increasing on average about 30% per year.  Since sales activity generally picks up at the end of each calendar year, I project the number of commercial transactions at the end of 2013 to match orexceed 2012 levels. 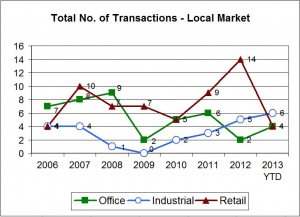 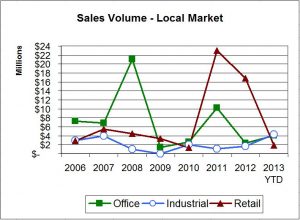 In line with the laws of supply and demand, sale prices paralleled sales activity and volume levels over the past 6 years.  Local market prices peaked in 2007, with an average retail price of approximately $282/sf; an average office price of approximately $223/sf; and an average industrial price of approximately $125/sf.  Values bottomed out in 2008 & 2009 and since that time have been vacillating slightly above these levels based on a combination of distressed and normal market sales.  As most of our local lenders’ REO properties have now been sold, and as new commercial distress is slowing, I expect commercial property values to begin trending upwards, especially in light of the increasing transaction volumes indicated above. 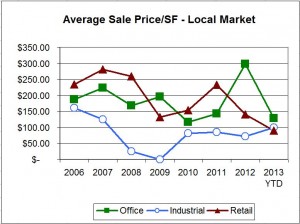 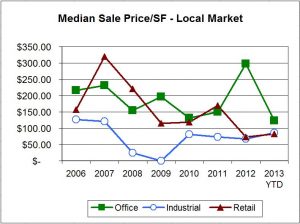 So what’s in store for Western Nevada County’s commercial property market for the remainder of this year and next?  I believe the following positive influences on pricing will outweigh any foreseen negative influences: i) relatively low vacancy rates;  ii) continued low financing rates (10-year fixed-rate financing can still be obtained in the 5% range);  iii) lower rates of distressed properties coming to market;  iv) relatively high barriers to market entry (i.e. shortage of easily developable sites; restrictive permitting processes;  expensive new building code requirements, etc.);  and v) recent shortages of quality product and low rates of return in primary markets, such as the Bay Area, leading investors to secondary and tertiary markets such as Sacramento and Nevada County in search of greater financial returns.  The greatest negative influences on property values would be weak or negative job, population and income growth.  Stay tuned for our new 3rd quarter 2013 “Commercial Property Review” newsletter coming out next month.

Local sales data listed herein obtained from both proprietary sources and the Nevada County Association of Realtor’s MLS.  Sacramento data obtained from Real Capital Analytics.  Lock Richards is Managing Director of Highland Commercial Real Estate and can be reached at 530-470-1740, or on the web at highlandcre.com.