While the overwhelming majority of real estate reporting focuses on residential real estate and home values, this new monthly column will seek to provide valuable and timely information for business owners, landlords, property investors, tenants and anyone else interested in the commercial and investment real estate market in Western Nevada County.

I specialize in commercial real estate and, through my firm, have developed a comprehensive data base tracking approximately 7 million square feet of industrial, office and retail properties in the Grass Valley and Nevada City areas.

The following is a partial summary of our 2nd Quarter 2013 Commercial Property Review Quarterly Report. The good news is that the difference in the level of activity during the last three quarters (since fourth quarter 2012) is in extreme contrast to the previous four recessionary years. I believe the majority of investors and tenants have now come to realize that the timing is perfect to purchase or lease commercial property. Add to this still historically low financing rates and plentiful debt and equity sources, and today’s market could not be much better for buyers and tenants.

That said, with numerous bank-owned and other distressed properties closing in Q4 2012 and Q1 2013, from a pricing standpoint we remain at the bottom of the market, even with the increasing activity levels. Barring an unforeseen macro-economic event, we predict slowly increasing prices over the next two years in most commercial property types. Commercial properties can be divided into four primary groups: office, industrial, retail and multifamily (i.e. apartments of more than four units in size).

This month’s report will focus primarily on leasing activity in the office, industrial and retail groups. Starting with the office segment, vacancies have been increasing over the past year with the vacancy rate now standing at approximately 13.2 percent, meaning we currently have roughly 320,000 square feet of vacant office space for lease in the Grass Valley/Nevada City region.
This may sound quite ominous until compared to Sacramento’s current office vacancy rate of approximately 16 percent and Roseville/Rocklin’s vacancy of +/- 21 percent. The major contributors to increasing office vacancies recently have been large tech companies (including Sierra Video Systems and Grass Valley) who have moved large company divisions (related primarily to light manufacturing, assembly, shipping and receiving) out of the area. 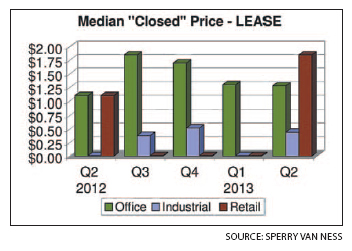 The median lease rate for closed office deals has, correspondingly, been declining and is currently approximately $1.28 per square foot gross, although the various classes of office space (A, B and C) will trend differently. In the industrial segment, vacancy appeared to reach its latest peak in Q1 this year. Due to new leasing activity in the Whispering Pines area and several smaller properties coming off the market, the industrial vacancy rate has recently fallen to approximately 7.4%, which equates to roughly 130,000 square feet currently on the market for lease. In comparison, industrial vacancy in the Sacramento region currently stands at +/- 12.9 percent. As shown on the adjacent graph, listing lease rates for industrial properties have stayed fairly consistent over the past year at approximately $.65 per square foot gross. Keep in mind that this is a median price and that pricing for different quality properties may vary considerably.
In our 15-plus years of working in commercial real estate in this area, the retail property market has consistently been the strongest in terms of vacancy.
Retail is all about location and the prime retail corners and anchored centers have been developed and consistently occupied for years. Over the past few years, the City of Grass Valley has undertaken studies, annexations and various other efforts in an attempt to “open-up” more retail opportunities, bring in greater retail variety desired by local residents and improve sales-tax generation. These efforts will see their greatest return with projects such as the new Dorsey Drive interchange, now under construction, which could potentially provide new and, more importantly, desirable retail sites. Retail vacancy currently stands at only 5.7 percent, or roughly 150,000 square feet available. In comparison, the Sacramento area retail vacancy stands at 13 percent. The majority of retail availabilities are in freestanding street retail areas and unanchored strip centers. At this time, the average asking rate in anchored centers is more than $2 square foot gross. Anchored centers can command premiums of 50 percent or more over unanchored centers due to the draw of the anchor tenants (for example, Raleys, Safeway, Staples), increased pedestrian and vehicular traffic, plentiful parking and one-stop shopping convenience. 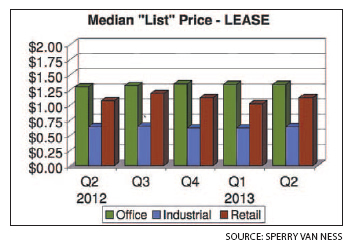 Lock Richards is managing director, Highland Commercial, and I can be reached at 530-470- 1740 or lock@highlandcre.com.